The PI Behavioral Assessment and PI Learning Indicator are delivered in two very different ways. Here’s what to expect in your tests.

The Behavioral Assessment and the Learning Indicator

The Predictive Index Behavioral Assessment and Learning Indicator are two psychometric tests used in tandem to provide a prospective employer with a fully-rounded insight into the inherent traits of a candidate, covering behavioral tendencies and cognitive capacity. The former is, unsurprisingly, a behavioral test. The latter is a cognitive test. Because of this, the format of each exam is quite different.

In order to help along your journey to success in the Predictive Index tests, Prepterminal’s expert psychometricians have composed preparation packs for both the PI Behavioral Assessment and the PI Learning Indicator. Providing all the tools required for building a comprehensive knowledge of both tests from the ground up, our preparation packs are an exceptional asset in test success and progression through the employment process.

The PI Behavioral Assessment is delivered as an untimed self-report survey in a free-choice setting. It is found to usually take between 5 to 10 minutes.

The 86 adjectives can cover positive or negative traits, and many of the adjectives used are synonymous to ensure consistency on the part of the test-taker. The selection might resemble the small sample shown below:

It is important to stress that as this test features many synonymous terms it is difficult for test-takers to game the system; unless one is focused on a very specific one wishes to portray, it is not particularly viable to give a false image without being caught out.

That said, if you are seeking to effectively convey your best traits to a prospective employer, it is essential that you take the time to understand the way in which the descriptors you choose, as well as the ones you don’t, paint a picture to be presented to the employer. Prepterminal provides the resources necessary to establish a comprehensive understanding of the test format. Our preparation pack features text and video modules and online PI Behavioral Assessment practice tests in order to ensure that you enter the real exam fully prepared to put your best foot forward and impress prospective employers.

The Number Series questions in the Learning Indicator feature a series of numbers which are in the given order because of an unknown pattern. It is the task of the candidate to identify the pattern connecting these numbers and apply that pattern in order to identify the next number in the sequence. The complexity of these questions can vary, ranging from simple arithmetic to more complicated interleaved sequences.

When approaching these questions, it is recommended to start by checking for a simple relationship between the given numbers. If none can be identified, further examination will be required in order to discern a potentially complex connection.

What is the next number in the following series of numbers?

The Math Problems contained within the Learning Indicator present the candidate with a series of numbers or fractions, the task being to identify which represents the lowest number.

Which number has the lowest value?

The Word Problems section of the Learning Indicator presents the candidate with short texts, from which the solution for a mathematical problem is to be found.

Answer: C, 2 hrs 45 mins. The answer is found by first establishing a combined speed of 80 mph, and then using this speed to calculate that two full hours are taken for 160 miles of travel between the two. This leaves 60 miles to be accounted for, the fraction of an hour taken to travel this distance at 80 mph being given by:

We then convert into minutes:

We then add the previously-established 2 hours to reach 2 hours 45 mins.

Fear is to Composure as Zenith is to:

The Formal Logic section of the Learning Indicator presents the candidate with 2 or 3 assumptions and a conclusion. The task is to determine whether the conclusion is correct based on the assumptions. There are three answers to be chosen from: “Correct”, “Incorrect”, and “Cannot be determined based on the information available”.

Conclusion:
No walking dead are shape-shifters

The Antonyms sections of the Learning Indicator presents the candidate with a word, and requires the candidate to choose the correct antonym of the word – i.e., the opposite.

Choose the word which is the exact opposite of the given word:
Dextrous

Answer: B, Maladroit. Maladroit is the opposite of dextrous; i.e., the antonym.

The spatial awareness section of the Learning Indicator presents the candidate with two figures which have something in common. Four figures are presented as possible answers, and the candidate is required to determine which figure does not have the same feature in common.

Answer: C.All other figures have a dot on the right side, where the triangle in C has a dot on the left side.

In the non-verbal analogies section of the Learning Indicator, the candidate is presented with an image that undergoes a certain change. A second image is then provided which is supposed to undergo the same change, and the candidate’s task is to determine which of four given images is the correct appearance of the second image after the change.

Answer: B. Each triangle in the square is flipped along the edge furthest from the dot. Answer D is placed as a red herring as it shows some of the correct traits to follow a pattern but not all of them. Bear in mind that some answers may initially look like they make sense, but are not always the ‘most’ correct answer.

In the Inductive Reasoning Section of the Learning Indicator, the candidate is presented with a series of figures and is required to identify a pattern and select the missing figure. 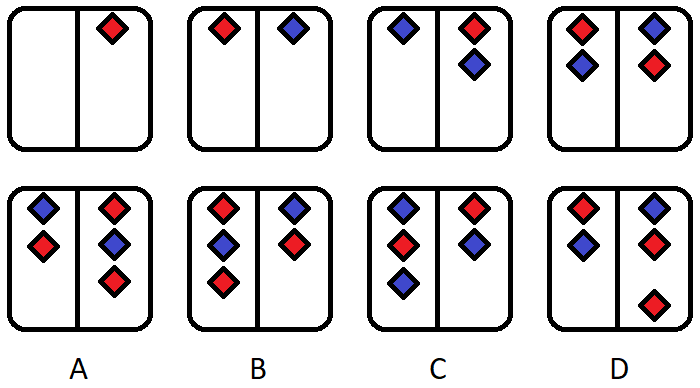 Which figure comes next in the sequence?

Answer: A.A new diamond shape is added on the opposite side to that in the previous figure. Additionally, the colors are swapped between sides with each new figure.

As we’ve seen, there is a lot of ground to cover in the PI LI test. To this end, it is incredibly important to take the time to learn and practice the contents of the exam in order to ensure success in the recruitment process.

Prepterminal has prepared a comprehensive test preparation pack for the Predictive Index Learning Indicator, covering every question format in depth and teaching you the tips and tricks necessary to solve these questions quickly and effectively so that you may find success despite the harsh time limit.
When taking your exam during the recruitment process, you’re only going to get one shot. There are no do-overs in the real thing. Don’t take the risk of going into your test blind – sign up for our test preparation pack today and be exam-ready in no time.

GOT A PI TEST COMING SOON?

Start your practice for FREE