Predictive Index’s Behavioral Assessment and Learning Indicator share a scoring system for multivariate analysis. Here’s what you need to know.

The PI Behavioral Assessment and PI Learning Indicator are two psychometric tests employed by the Predictive Index as a part of their assessments. The company itself puts forward that resumes & interviews cover the education, knowledge, skills, and experience of a candidate but do not cover behavioral and cognitive traits in the candidate. It categorizes the covered categories in a subset of work performance it considers to be ‘learned,’ while behavioral and cognitive traits are in a ‘kind-of fixed’ subset, meaning it is very much tipped towards nature in the nature-nurture scale.

It is for this reason that the two assessments are administered in tandem. By meeting these needs, an employer can gain a far more accurate insight into the appropriateness of a candidate for a given role – the accuracy of insight when using both tests in tandem compared to simply following an unstructured review has been found to be 8x greater.

How are the Predictive Index Tests Results Delivered?

Predictive Index gives results for the Behavioral Assessment and the Learning Indicator differently – as is expected given that the former is a behavioral test and the latter a cognitive test. Results from the Behavioral Assessment are delivered in the form of a qualitative report intended to inform an employer of the behavioral traits displayed by a candidate. In contrast, results of the Learning Indicator are delivered as a score out of 50, which is then converted to a scale score that ranges from 100-450 for objective assessment of General Cognitive Ability (referred to by Predictive Index as GCA).

Prepterminal has composed test preparation packs for both tests so that you may impress prospective employers with your cognitive and behavioral profile. Sign up now to start on the path to success in the interview process.

The results of the PI Behavioral Assessment are delivered as a report which covers the categories of Self, Self-Concept, and Synthesis of self and self-concept. It provides a rating on four scales.

With an additional scale in Synthesis:

Following this, a number of qualitative descriptions are given:

Strongest Behaviors: This section gives a description of which behaviors the candidate is likely to most strongly express, going into detail on how each behavior reflects upon workplace performance. For instance, it might identify a candidate as having a strong sense of urgency, putting pressure on themselves and others for immediate results, meaning the candidate is not suitable for routine work.

Summary: An overview of the picture painted by the assessment. This section essentially encapsulates and summarizes the information contained within the other sections.

Management Style: As the name might suggest, this section lays out how the candidate would perform as a manager of people or projects; strengths in leadership style are spelled out clearly so that prospective employers can easily comprehend how the results pertain to the candidate’s capability as a leader.

Influencing Style: This section explores the interpersonal skills of the candidate, examining facets of their behavior such as persuasiveness, emotional intelligence, and the ability to navigate the ‘politics’ of an organization.

Management Strategies: As the final component of the report, this section deviates from the tone of the other sections. Rather than describing the characteristics of the candidate, this section gives suggestions as to how an organization may maximize the effectiveness of the candidate in terms of what should be provided in the workplace, such as whether freedom from repetitive routine should be ensured.

The results of the full PI Behavioral Assessment are also used to group the candidate into one of 17 “Reference Profiles”, which are separated into 4 categories:

To enable you to put your best foot forward and showcase the personality traits you want your prospective employer to see, Prepterminal’s expert psychometricians have produced a PI Behavioral Assessment test preparation pack containing both educational modules and mock tests so that you may learn the inferred meaning behind each. Every adjective you select so that when you face the whole exam, you will be fully capable of putting forward the image you wish prospective employers to see, bringing you one step closer to your dream job.

In terms of cut-off scores, the required score to pass to the next stage of the interview process is determined by the employer, based on the job profile and consultancy provided by the assessment company distributing the PI LI to the employer. Predictive Index has produced a table of scores a candidate should aim for based on the role they are aiming for. While these are not a guarantee of employment upon achieving the score, they go a long way towards improving an individual’s likelihood of success in a certain industry. 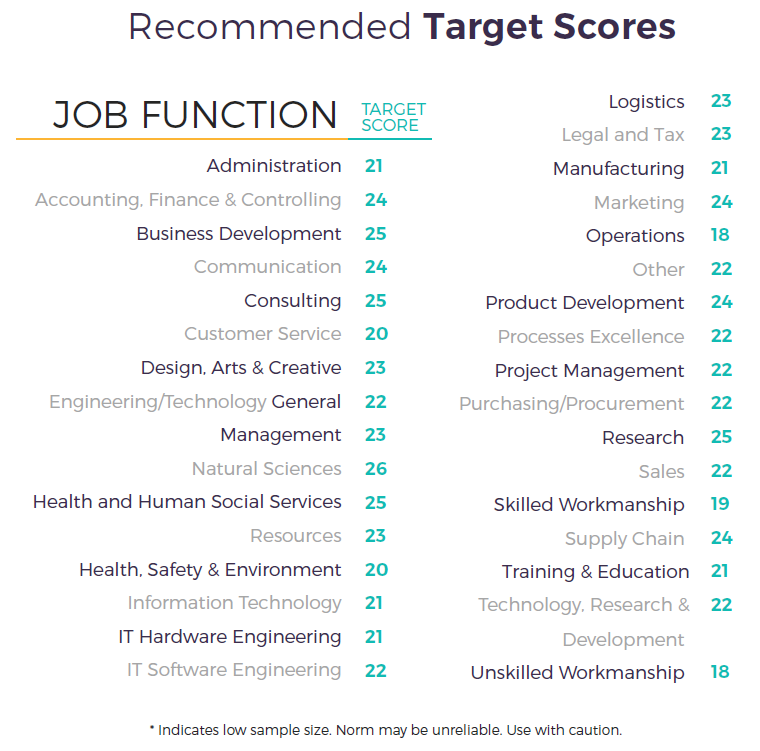 The given scores serve as an estimate of what a candidate needs to achieve in order to be considered for a job role. It is recommended by the Predictive Index that an individual should add 2 to their target score in order to improve competitiveness as a candidate being 2 points above the target score indicates a “100% cognitive fit” for the role.

The conversion of Raw Score to Scale Score is given below: 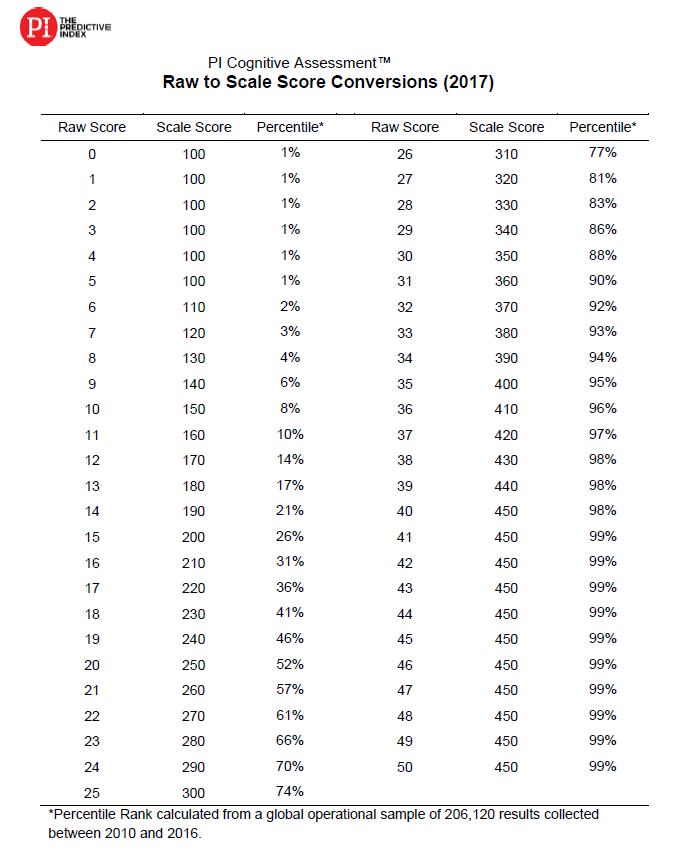 As is seen in the Scale Score conversion, there is no distinction between a raw score of 40 and 50, as they are such exceptionally high scores that they fall only within the 98th percentile.

The PI LI test provides employers with an objective, quantitative metric of a candidate’s General Cognitive Ability. In addition, by providing a single numerical score, the sorting of candidates by ability is made exceptionally easy.

To ensure the maximization of your performance in this test, Prepterminal has produced a PI Learning Indicator test preparation pack filled with educational modules and practice tests so that you may go into your examination fully prepared for the questions which arise. Using our resources ensures improved results in your PI PLI test, getting you one step closer to your dream job.

Extraversion: The degree to which an individual seeks social interaction with others as well as social acceptance. Those who score high on this dimension are persuasive, outgoing, and socially affluent, while those who score low are serious, task-oriented, and introspective.

Patience: The degree to which an individual seeks consistency and stability in their environment. Those who score high on this dimension are consistent, deliberate, and patient, while low-scorers are intense, fast-paced, and urgent.

Formality: The degree to which an individual seeks clarity and understanding of rules. High-scorers on this dimension are self-disciplined, organized, and precise, while those who score low are uninhibited, informal, and casual.

Response level: Measures an individual’s overall responsiveness to the environment, as reflected by their energy, activity level, and stamina. High-scorers on this dimension are seen to have an increased capacity to sustain activity as well as increased stress tolerance, while those who score low on this dimension tend to have a far lower capacity.

Prepterminal’s PI Behavioral Assessment preparation pack dissects each component in-depth and explores how your responses in the assessment portray each dimension of your personality. To ensure that you are accurately and effectively communicating who you are to a prospective employer through the PI Behavioral Assessment, sign up for our course and master the assessment in a matter of hours.

As stated earlier, the greatest asset of the Predictive Index’s psychometric testing is the synergy between the Behavioral Assessment and Learning Indicator. It is standard for employers to use both tests in tandem as they build a comprehensive understanding of those traits in a candidate which cannot be discerned from a resume and interview alone.

After administering both tests, employers will prioritize candidates based on performance in both Behavioral Fit and Learning Fit (General Cognitive Ability). It is not enough to score high in the Learning Indicator or to only showcase the right traits in the Behavioral Assessment; success in both components is required for success when dealing with Predictive Index tests.

If you are required to take the Predictive Index tests, the best course of action is to put in the time to practice both components – it is not a sound strategy to focus on one component and neglect the other. Prepterminal offers comprehensive study resources for both tests, using both text and video modules along with online practice exams to ensure that you can improve your performance and benchmark your progress as you progress. When it comes to the interviewing process, your prospective employer will not offer you a second chance to impress them. So don’t risk going in blind – sign up for our preparation packs today and get started on the road to success.

Hey, I’m Michael, PrepTerminal’s Predictive Index expert. I am here to help you with any questions or concerns you may have about the PI Test. Feel free to contact me at [email protected]

Pass your test by preparing for just a few hours!